Preventing a Horse from Cutting Corners

Several problems are created when a horse cuts the corners of the ring on course. First, the horse’s weight is distributed too heavily toward the inside of the turn, so that the animal is unbalanced on its approach to the upcoming line. Second, this habit is usually accompanied by the horse being bent in the wrong direction, so that its vision is jeopardized. Third, by cutting corners, the horse leaves the rider with fewer strides in which to make adjustments following and leading into the lines of fences. 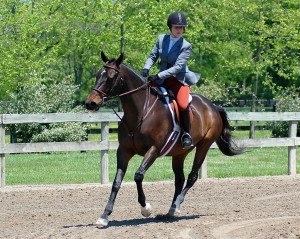 The horse is bent the wrong direction and leaning inward as it cuts the turn.

The main thing to remember in solving this problem is to push the horse to the rail with an inside leg and an inside indirect rein, rather than pulling it to the rail with an outside hand. In practice sessions, wherever the horse starts to cut the turn, do a downward transition to the walk and push the horse toward the rail using the aids given above. In competition, if the horse tries to cut the turn, shift your upper-body weight slightly toward the outside of the turn while using the aids given above. This will help adjust the vertical plane of the horse’s body back to center, making it more difficult for the horse to cut in. 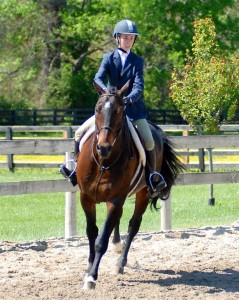 The horse is properly bent on the corner. Notice how the rider and horse are aligned on the same plane.