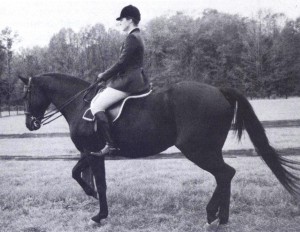 A good hunter should take long, low steps across the ground (sometimes called “daisy cutting”) and cover about twelve feet per stride on course. When it jumps, its knees should be held high while its fetlock joints are folded tightly. Its topline should be round in the air so that its haunches are counterbalanced by an outstretched head and neck. Most importantly, the horse should be calm, giving the impression that it is both safe and sane. In choosing a horse, your first consideration should be the horse’s temperament, then its jumping ability, and finally its way of moving. No matter how athletic or physically attractive a horse is, if it rushes around a course looking wild-eyed, it won’t win any ribbons in hunter classes at a decent show. 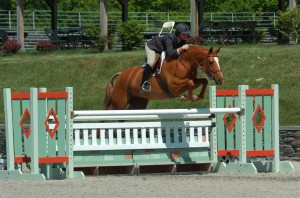 This horse exhibits good jumping form, with a round topline and evenly-folded legs held high.