When to Use Two-Point, Three-Point, and Modified Three-Point Position

“Two-point position” is used during the hand-gallop and for riding hunter, equitation, and jumper courses, beginning in the initial circle and ending as the horse performs a downward transition at the end of the round. 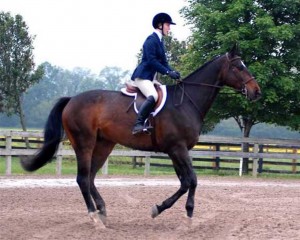 Two-Point Position---The rider's legs are on the sides of the horse, the seat is out of the saddle, and the upper body is inclined about 20 degrees in front of the vertical.

“Three-point position” is used at the walk, sitting trot, and canter, and on course only in extreme situations—such as when the rider needs the seat as a driving aid when a horse tries to refuse an obstacle, or when there is such an acute turn during a jumper course that the rider must fully sit in order to execute it. 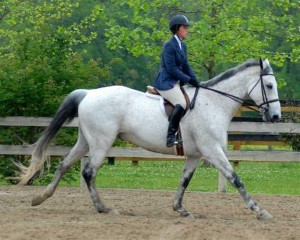 Three-Point Position---The rider's legs are on the sides of the horse, the rider's seat bones are on the saddle, and the upper body is inclined only 2 to 3 degrees in front of the vertical, which is the same position as for the walk and sitting trot.

“Modified three-point position” is used occasionally during an equitation or jumper course, when the rider needs to drop his center of gravity and brace himself a little more at the thighs in order to execute a sharp turn or ride a distance set on short strides. 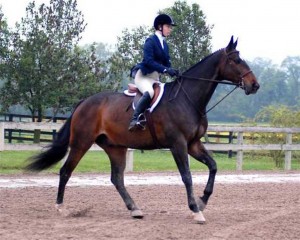 Modified Three-Point Position---The rider's legs are on the sides of the horse, the crotch is lowered into the saddle, and the upper-body is at the same 20-degree inclination as in two-point position.

A major error is the use of three-point position as the “status quo” during any type of course over fences. In hunter classes, three-point position is unnecessary and makes the performance look stiff, rather than flowing; in equitation classes it is theoretically wrong, since the proper use of two-point has been established to free the horse’s back of the rider’s weight and to put the rider in a stationary position that allows the horse to maintain its balance at take-off, in the air, and on landing; and in jumper competition, three-point position slows the speed of the horse, which can be a critical fault in classes in which time counts.

The inappropriate use of three-point position indicates that the rider is using his seat to supplement an ineffective leg aid and/or the rider is lacking in knowledge of the basics of hunter seat riding.