The hand gallop is used for jumping fences and is also one of the USEF’s Tests 1-19. It is performed at between fourteen and sixteen miles per hour, or 1232 feet to 1408 feet per minute, and should appear controlled and at a speed appropriate for the size of the arena. At the hand gallop, the horse’s footfalls strike in the same three-beat sequence as at the canter. This distinguishes the hand gallop from the faster racing gallop, which through extension of the horse’s limbs causes the feet to fall in four separate beats. 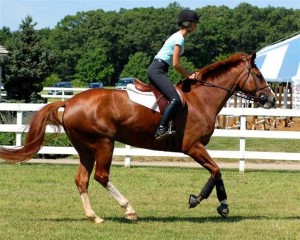 The rider's body is correctly angled about 30 degrees forward during the hand gallop on the long side of the arena.

You should be in two-point position for the hand gallop, with only your two legs making contact with the horse, and your usual third point of contact, your seat, being raised above the animal’s back. The lack of weight makes it easier for the horse to carry you at a greater speed and enables it to jump less encumbered. 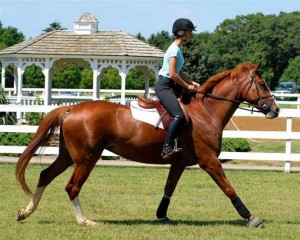 The rider's upper body should be a little less inclined as the horse begins the curve on the short side of the arena. Demonstration rider, Maria Schaub, has correctly opened her upper body slightly to help balance the horse on the curve.

Your torso should be inclined forward at the hand gallop, “with the motion” of the horse. The angulation will vary somewhat as the horse’s stride is shortened or lengthened. For example, when the horse is hand-galloping down the long side of the arena, your hip angle should be closed about 30 degrees in front of the vertical to be with the motion. Just before the short side of the arena, you should open the angle to a slightly more erect position, so that your upper-body weight can aid your arms in collecting the horse to balance it for the corner. Your seat, however, should remain out of the saddle the entire time.