It is always easiest to perform the canter depart as you begin to turn a corner, for the bending shape gives the horse a clear idea of the lead it needs to take to keep its balance. If you are riding in an oval-shaped ring, you can practice the canter depart anywhere along the curves; but it is wisest to pick up the canter when the inside foreleg is on the side of the horse closest to the barn or outgate, for all horses are aware of these locations, and some seem to be drawn toward them like a magnet. Thus, the barn or outgate can be used to help you get the proper lead.

Make sure your outside leg–the one toward the railing–is in behind-the-girth position, which is about four inches back from the normal leg position. For a horse that doesn’t want to start the canter sequence properly with its outside hind leg, push the haunches slightly toward the inside of the arena, bending the horse around your inside leg. This will place the horse’s outside hind leg underneath its body, so that only this leg will be able to start the canter depart.

At the walk, monitor the footfalls of the horse’s hind legs with your seat, and be especially aware of every time the horse’s outside hind leg is lifting off the ground and striking forward. Press this leg forward in a marching rhythm with your outside leg, until you feel that the horse has enough momentum to push off immediately into the first canter step. The sequence of footfalls should be: outside hind foot; followed by inside hind foot and outside forefoot striking together; and finally the inside forefoot (the leading leg) striking. 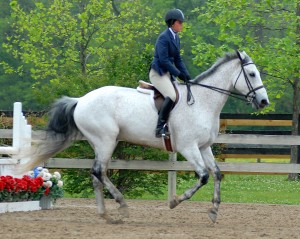 The horse begins the canter sequence with the outside hind leg, which lifts the other three legs. 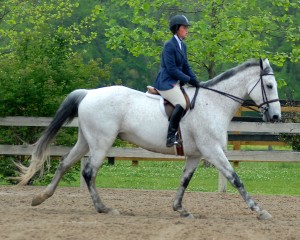 The inside hind leg and outside foreleg strike together to create the second beat of this three-beat gait. 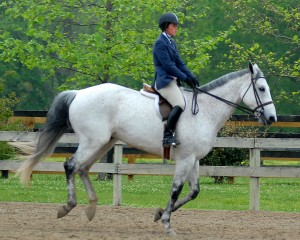 The inside hind leg creates the third beat of the sequence. Notice the motion of the horse in the three pictures above. First the animal lifts its body, then two feet land together, and the final leg lands, with this sequence creating a rocking motion.

The horse should be slightly bent to the inside for the basic canter depart, which is another means of making the intended lead more clear to the horse. The aids for the canter depart, then, should be:

To practice the canter depart, you can bisect the arena mentally, forming a “point A” on one short side of the arena, and a “point B” on the other short side. Then pick up the canter every time you get to these points. Once the horse is responding well to this exercise, add canter depart points at the middle of the two long sides of the arena, so that you are practicing the canter depart at four points every time you go around the ring.  Work through this exercise once the first direction, then reverse and work the other direction. This will not only keep your horse’s training even on both sides, but will also help the animal work through the problems on one side by practicing correctly on the other.