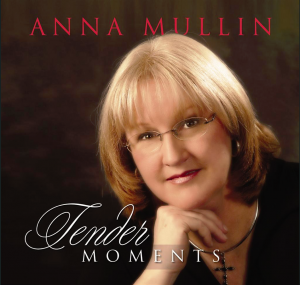 Tender Moments, a stunning new compact disc that captures the sweet essence of spirituality with a pop music flair, offers seven solos by soprano Anna Mullin and three duets with Mullin and Mark A. Harris. Accompanying them are David Davidson, violin and viola, a Nashville studio musician who has been heard on 15,000 recordings, and pianist Tim Parton, also a Nashville studio musician.

The recording was made at Goldmine Studio in Hokes Bluff. The disc, already getting airplay in England and Canada, will be released this month in the U.S. Radio stations across the country have requested advance copies, says Mullin, singer, composer and dramatist, whose Jerusalem’s Gate and other religious dramas have played to huge audiences in the Mort Glosser Amphitheater and churches.

Tender Moments, a compilation of 10 songs written by Anna, defies genre labels. “People ask me what my music is,” Anna says, “and I say, either contemporary, inspirational or praise and worship, because I’m not quite sure what people in the Christian music field would call it. It’s different – a sort of cross between contemporary Christian and classical. I’ll know more in a few weeks when I see what radio stations are calling it.”

She was an honors graduate of Randolph-Macon Woman’s College in Lynchburg, Va.; has been a soprano soloist in many musicals, both religious and secular; played Anna in The King and I; starred in Amahl and the Night Visitors and Some Enchanted Evening; and was soloist in Dubois’ Seven Last Words of Christ and Handel’s The Messiah.

CrossPoint music minister Mark A. Harris, who grew up in Mount Hebron, gained his early musical experience by singing in Pentecostal churches. He graduated from the University of Mobile with a bachelor of arts in music/vocal performance and a minor in religious studies. He has been a church worship leader and music director since 16 and was ordained in 1990. As a young adult, he was a soloist in a Mobile production of Amahl and the Night Visitors. He’s a member of the Gadsden-Etowah Community Choir. Mark and his wife, the former Lisa Wright, have two children.

David Davidson has worked on a wide variety of musical styles, accompanying major country, pop, rock and contemporary artists. On the Green Hill label, he has recorded instrumental works such as , and many more.

Tim Parton is a pianist, producer and arranger, primarily in the Southern gospel genre. He’s also a sought-after Nashville studio musician, as keyboardist for the Speer Family, the Gold City Quartet, Vestal Goodman, Janet Paschal, Mike Speck and the Gaithers, with whom he appears in the popular Homecoming video series.

Purchase a copy of Tender Moments, physically or digitally, at Amazon