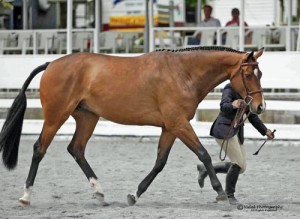 During the pandemic, the USEF decided to try a new way of testing a horse’s lameness, which involved trotting the horse in a circle while mounted at the end of a course.  However, an official “jog” has not be ruled out, so the following information explains how to do it. When your horse’s number is called in a class that requires jogging for soundness, you should run briskly beside the animal (as in the photo), rather than being in front and dragging it along.  It is important to practice jogging at home until you’re sure your horse will immediately go forward as you run.  Always stay on a straight line down the arena and be aware that you need to run far enough to allow horses behind you to also pass the judge at the trot.  Make sure your animal keeps a flowing rhythm, for a dull, plodding horse will sometimes appear lame.  Remember, a good jog is the finishing touch on a winner!