Straightness Affects the Distances Between Fences

By focusing down an entire line of fences, rather than from one fence to another, you encourage straightness in your horse and make it much easier for the animal to get down the line “in the numbers”—that is, in the number of strides in­tended by the course designer. The straighter a horse is in a line of fences, the less footage the animal loses to sideways motion. Straightness, then, makes it possible for the horse to travel down the line in the proper striding without having exces­sive pace. In contrast, a horse that wanders off the correct line must increase its speed to lengthen its stride, so that it can make up for the footage lost in sideways motion. 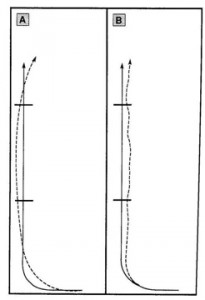