During the test of the halt, the judge is as concerned with the downward transition as with the halt itself. When a horse correctly performs this test, its hocks stay engaged throughout the downward transition, until the halt is completed with the horse standing squarely. In order to keep the hocks engaged, you must maintain pressure with your calves against the horse’s sides and may even have to increase that pressure if the horse begins to pull on the reins and drop its haunches out behind. The combination of a supporting leg and multiple half-halts encourages the horse to stay in the proper frame and not elongate its body.

When the downward transition is correctly performed, you feel the horse’s hind feet dance beneath your seat. This lilting feeling is caused by the hocks’ circular movement as they remain engaged. If you do not experience this, but instead feel that the horse’s back is flat and its hind feet are strking behind your seat, then you know the horse has lost the engagement of its hocks. This incorrect position of the animal’s hind legs compromises your ability to perform specific movements accurately, since your control over the horse decreases as the hocks lose their engagement.

The degree of collection necessary at the halt depends upon the difficulty of the segment of the test immediately following the halt. For example, if the end of a test calls for the rider to halt and then exit the arena at a sitting trot, the horse could successfully perform the final segment while collected into a medium frame. However, if a test asks the rider to halt and then pick up the counter canter, a short frame would be necessary at the halt, in preparation for the difficult movement that follows.

The main points judged during the test of the halt are:

Owing to its usefulness as a test of obedience, the halt is frequently asked for by judges in gauging all levels of riders. 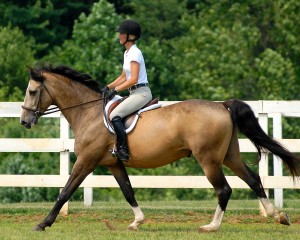 The horse is in a relaxed, medium frame at the canter, prior to the downward transition. 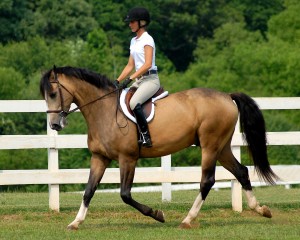 The horse remains in a steady frame, and the rider is correctly sitting throughout the transition. The rider should be sitting during all upward and downward transitions. There is no exception. 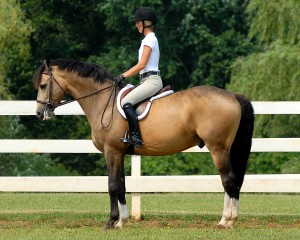 The horse is correctly standing squarely at the halt, with a relaxed demeanor and round frame. Notice how the rider, Maria Schaub, maintains an impeccable position throughout this series of pictures.