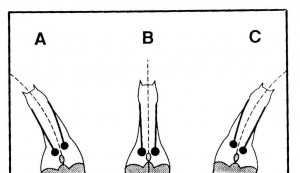 An indirect rein position varies according to the degree of the bend.  For example, when making a small circle, the horse would be bent more acutely, so the inside hand would be back more and the outside hand would have to move forward more to enable the horse to have a greater bend in its neck than if the horse were on a larger circle.  The indirect rein can also be used very subtly.  If a horse is spooking away from something on the outside of the arena, the rider can use a slight inside indirect rein, bending the horse toward the inside of the arena just a little, prohibiting the animal’s eyes from locking onto the spooky object.  In this case, the bend would not be nearly so much as pictured above.