Correcting a Refusal or Runout

Whether the horse tries to run out at the fence or simple stops directly in front of it, the issue is the animal’s lack of obedience in going forward from the rider’s leg. For this reason, once you have the horse standing squarely in front of the fence, punish its source of forward momentum, which is the rear part of its body, with your stick in the area just behind your calf–on the horse’s ribcage. If the horse stopped straight, you can punish it on either side; but if it veered when stopping, apply the stick on the side to which the animal tried to escape. 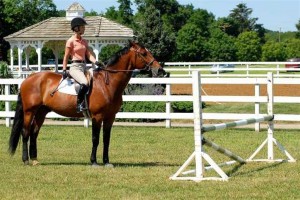 When a horse has a refusal or runout at a fence, correct the disobedience by making the horse face the obstacle, then applying the stick on its barrel. The stick should never be applied anywhere in front of the saddle.

By being prompt with your correction, you won’t have to exert a tremendous amount of physical force. You are not trying to inflict pain, but rather just enough discomfort so that the horse would rather jump the obstacle on the next approach than be punished again with the stick. Remember, only do what it takes to get what you want from the horse–any more than that is abusive.

You should always carry a stick when jumping, so that it can be used immediately. If you have to hunt for one when a problem arises, the horse may have forgotten what it did wrong by the time you apply it, so that the punishment is seemingly unrelated to the initial problem.

Always remember to ease off the mouth when the horse leaves the ground to jump, for if your hands are hard and restricting, you will encourage it to refuse fences. Especially when it has stopped and you are approaching the obstacle for the second time, emphasize your driving aids–legs and seat, too, if necessary–and relax your hands as much as possible, keeping just enough tension on the reins to steer the horse. Your objective is to make going forward much easier than stopping.

You may not be able to keep a very light hand on a horse that wants to run out. In fact, you may have to use a great deal of hand pressure to hold it into the fence panel as it tries to veer in one direction. If this the case, be sure to release the horse’s mouth as it leaves the ground, offering more than enough slack in the reins over the fence so that it will realize that forward is the most comfortable direction.

If you ride the horse accurately to take-off spots, but it tries to refuse fences, ask a veterinarian to check for unsoundness. Lameness in a leg or foot, sore back muscles, or a spinal problem are typical unsoundnesses that will cause a horse to stop.